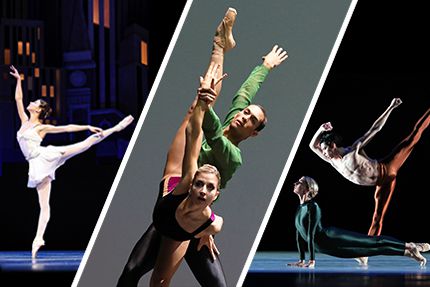 “Abraham begat Isaac; and Isaac begat Jacob; and Jacob begat Judas and his brethren.” The Apostles provide us with an unbroken line through the history of mankind. The history of ballet is much shorter, but works on the same linear principle of a family tree, with Noverre and Didelot on the ancient upper branches, while Ratmansky and Samodurov, Lightfoot and León blossom on the lower branches today. For its program at this year’s Dance Open, Dutch National Ballet has chosen a small section of this family tree, the one that starts with Balanchine. He was “begotten” by Petipa, and his descendants today are van Manen and Forsythe.

Just as in normal life, family ties do not mean a direct resemblance. Just as in a real family, “progeny” in schools of ballet can rebel fiercely against their “forebears”, making their own way in life and creating their own language. In time, however, family resemblances make themselves known, in a turn of the head, a taste for almond coffee, or an ancient step that suddenly appears in a ballet score, blending harmoniously into a flow of contemporary choreographic idioms. The three choreographers whose works are brought to us by the Amsterdam theatre have much in common, and in particular their musicality.

Of Balanchine’s works, the theatre has chosen Who Cares? — Gershwin and Hershy Kay, Broadway jazz distilled into immaculate classical form without losing its vitality. Balanchine, whose musical partners had previously been lyrical European intellectuals (from Tchaikovsky to Stravinsky and from Vivaldi to Ravel), takes a passionate approach to the music of America, finding sensitivity and depth even in passages that at first glance seem irredeemably hackneyed. He never apologizes for choosing overly simple themes, but instead undertakes to reveal their true complexity.

Van Manen’s approach is the direct opposite. In composing Kleines Requiem to music by Henryk Górecki, he takes the sophisticated compositions of one of the pillars of European minimalism and reveals to us their lyricism, appealing to the heart and not just the intellect. Van Manen’s regular musical interlocutors are Beethoven and Ravel, Mozart and Debussy, and he listens to music like nobody else. In fact, only Balanchine had the same attentive ear and the same willingness to submit his choreography to the orchestra or the piano — Petipa, while invariably a respectful listener to the music, always retained the last word. It would never occur to van Manen to argue with the music or set his dancers against it. He and they submit to it entirely. In a career as a choreographer spanning half a century, van Manen has trained literally hundreds of dancers, influencing not just the Netherlands’ principals and prima ballerinas, but also the whole mechanism of the corps de ballet — fast, flowing, tender and masterful. Furthermore, in van Manen’s performances there is never a sense of a “replacement cast” reenacting past glories – even the most complex combinations are performed with such ease it’s as if anyone could manage them. Innate beauty is the distinctive feature of van Manen’s ballets, and that is what he uncovers in Górecki — the innate beauty of music that might have been constructed from blueprints. Thus Kleines Requiem is transformed into an utterly spellbinding ballet.

But what is Forsythe, a choreographer with no great respect for melody, doing in this company? In his productions, there are often scrapes and groans coming from the stage. The dancers suddenly strike up conversation, or they move in absolute silence — when Forsythe’s works were first performed in Russia, audiences often wondered if the sound system hadn’t broken. Nonetheless, Forsythe does exactly the same thing as his elder colleagues: He listens to the music and matches it perfectly with movement. It’s just that the music is of our era, and our era is one of screeching brakes, shouted catchphrases, and (who sings a serenade these days?) declarations of love by SMS. Forsythe’s music is drawn directly from life and, while that can sometimes scare off those who look to ballet for a distraction from workaday life, it actually helps them to survive by finding harmony in contemporary urban soundscapes. At Dance Open, Dutch National Ballet will be performing Forsythe’s Pas/Parts to music by Thom Willems, which shows step-by-step how to turn the detritus of the city into a 21st century ballet.

What else unites these three great choreographers? Their attitude to line. It might seem that Balanchine and Van Manen usually extend and accentuate line, while Forsythe prefers to break it, but in Who Cares? Blanchine packs his text with the same sharp corners that for Forsythe are common parlance, unremarkable, perhaps even a little old-fashioned and in need of renovation, but certainly not forgotten. Rather than being linear descendants of Balanchine, Van Manen and Forsythe represent two branches of the family tree. Balanchine simultaneously worked for posterity and, in his narrative productions, referenced the events of his day. Van Manen is always conversing with the eternal, while Forsythe listens for the sounds outside his window. Nonetheless, they are family, and watching three of their ballets in a row is like turning the pages of magnificent family album. You see the blood that binds them and — by their haircuts, their poses, and they look they give to the camera — you see what your contemporaries find unacceptable in their forebears.