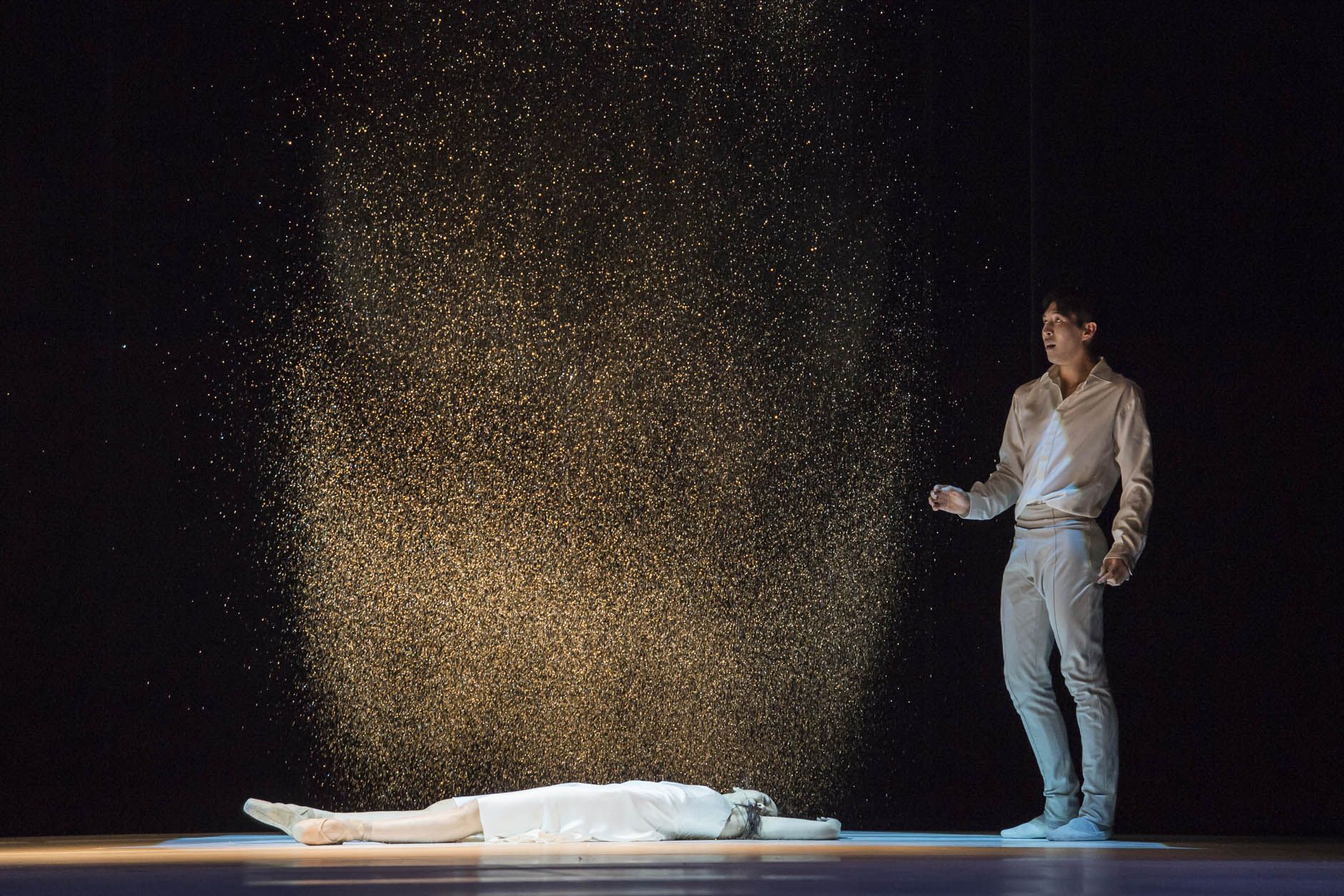 Cinderella:
about the performance

Loyal to his reputation as a fairy tale paleoanthropologist, Jean-Christophe Maillot strips Cinderella of its sugar-coated layer and delivers a poignant meditation on the way in which people who disappear shape the future of those left behind. The theme of a Prince who marries a peasant girl (an idea responsible for the shattered dreams and hopes of entire generations) is not given a lead role here. The choreographer denies this idea the importance it is usually given, preferring to focus on the emotional cogs that drive this timeless tale forward.

«Our dead…our poor dead. They ask for so little, and receive still less!» as François Truffaut lamented in The Green Room (La Chambre verte). Refusing to forget the deceased, his character keeps their memories alive with a passion that results in driving the living away. Jean-Christophe Maillot contemplates the same issue as soon as the curtains part: Cinderella appears, holding her deceased mother’s white dress in her hands. The object is a complex one. Cinderella buries her face in the fabric in a search for comfort, but almost instantly twists the dress into the unsettling shape of a rope. This embodies the complexity of bereavement: how can we remember those who have gone without their memory causing us pain? Jean-Christophe Maillot’s ballet shows us how Cinderella and her father solve the problem: a journey that the choreographer himself once embarked upon.

It is first and foremost Cinderella who seeks answers. Her father, more resigned, has started a new life for himself by marrying another woman. Yet in this new family over which he exerts little control, he is forbidden from dwelling over the past. What once was has become taboo under the influence of the Stepmother and her two daughters. Through these three characters, the choreographer breathes new life into the myth of the stepmother and her ugly daughters. This is no prudish, sour or bad-tempered woman, and nor are her daughters ugly or stupid. The habitual black-and-white take on the subject is set aside by the choreographer who believes that there is something good, or at least beautiful, in everyone. The three women in this new family are powerfully erotic. The Stepmother is a dazzling seductress who uses her charm to erode her husband’s authority. Her two daughters, meanwhile, understand the infallible power of the weapon of seduction, and under their mother’s guidance, learn to use it to formidable effect. It is impossible to fully hate these two seductive twins.

Jean-Christophe Maillot masters the art of lending nuance to characters that the entertainment industry generally paints with broad strokes. In his work, the ‘goodies’ irritate while the ‘baddies’ inspire our sympathy.

Jérôme Kaplan’s costumes are beautiful illustrations of the theme. The stepmother and her daughters move away from the traditional austere dresses and harshly pulled-back hair, instead appearing in colourful undergarments and extravagant wigs. Their dances are shameless and provocative: immodestly spread legs slicing through the air, swaying bottoms and hips as they sashay through Court. Conversely, Cinderella’s dance is fragile, moving, broken up into moments of yearning in which Cinderella demonstrates her desire to move forward interspersed with moments of despair (mirrored by her father) where sorrow and pain render her static, symbolic of the emotion of bereavement. To break the circle, Jean-Christophe Maillot has created another lead character: the Fairy, a radiant reminder or magical reincarnation of Cinderella’s mother. Memories finally cease to be painful. The memory of the deceased fades before a force that grants the power to change the course of things to come. Thanks to the Fairy, Cinderella frees herself from the traps of the artificial world we first found her in.

Because in addition to a reflection on mourning, Cinderella is a funny, incisive take on a society crammed full of artifice, where the quest for pleasure strips its inhabitants of any sense of reality. Frenzied distraction rubs shoulders with idleness, and the palace’s Two Superintendents of Pleasure are on-hand to entertain a moribund court slowly suffocating from boredom. Yet again, Jean-Christophe Maillot gives these two key characters movements all of their own. Every step, every jump reflects the over-excitement, one-upmanship and thirst for happiness they seem to mindlessly promote. Their faces frozen in idiotic smiles and mechanical movements illustrate their role as puppets of pleasure. In this world in which everyone play-acts at living, human beings of flesh and blood are a dying breed. The four mannequins who bring in the ball gowns and handle a puppet theatre are the perfect embodiments of the concept.

In contrast to this, Cinderella is simplicity incarnate (a key concept that influenced Ernest Pignon-Ernest’s set design). She needs no accessories to render her beautiful, and even the famous glass slipper is replaced here with a bare foot glistening with delicate, ephemeral gold dust. Cinderella’s bare foot becomes a symbol of ballet. It symbolises not only the simplicity and starkness of this young girl, but also a part of the body without which dance would not exist. The foot is the pivot of choreographic art, its pillar, its momentum, its take-off and its survival.

Somewhere between Cinderella and the lying, cheating world she inhabits is the Prince, imprisoned in his palace, brooding as he waits for a more real existence. Having only ever known flattery and emotional repression, he is unaware of the real world. Everything slips between his fingers like sand, he has no memory to hold on to because he has never truly lived. A spectator of his own life, he is suspended between life and the void. His moments of desolation and dejection differ from those experienced by Cinderella, yet they too hint at a dream of a different life. The Fairy blindfolds him so that he may know love beyond a pretty face, and he is forced to leave his world to seek the one he loves. The young woman’s salvation does not lie in the social status her future husband can offer her: the Prince must abandon his palace and prostrate himself ‘at the feet’ of his loved one. Thus, the lovers embark on a journey hand-in-hand, ready to take on all that the world offers up to them. Death is no longer unbearable. The deceased walk beside them. And they lived happily ever after…