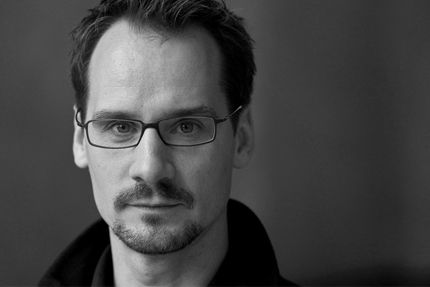 Christian Spuck is a native of Marburg, Germany and director of the Ballett Zürich since season 2012/13. After receiving his initial ballet training at the renowned John Cranko Schule in Stuttgart, he embarked on his subsequent dance career with Jan Lauwers’s Needcompany and Anne Teresa de Keersmaeker's Rosas ensemble. He joined the Stuttgart Ballet in 1995 and was appointed choreographer-in-residence of the Stuttgart Ballet in 2001. Choreographies for the Stuttgart ballet include das siebte blau (2000), Lulu. Eine Monstretragödie (2003), Der Sandmann (2006) and Das Fräulein von S. (2012).

Christian Spuck has produced further choreographies for several renowned ballet companies in Europe and the USA. These include Morphing Games for the Aterballetto of Italy (1999), Adagio for dancers of the New York City Ballet (2000), this- for the Berlin Staatsoper Ballet (2003), The Restless (2005) for Hubbard Street Dance 2, The Return of Ulysses (2006) for the Royal Ballet of Flanders (with guest performance at the Edinburgh International Festival in 2009), Leonce und Lena (2008) for the Aalto Ballet at Theater Essen, that has also been incorporated into the repertoires of Les Grands Ballets Canadiens, Stuttgart Ballet and Ballett Zürich, and Woyzeck (2011) for the Oslo National Ballet, which has also been performed by the Ballett Zürich. Choreographies for the Ballett Zürich include Romeo und Julia (2012), Sonett (2014) and Anna Karenina (2014).

In recent years Christian Spuck has extended his artistic reach to film and musical theatre. Amongst others, he directed Orphée et Eurydice (2009) for the Staatstheater Stuttgart, Falstaff (2010) for the Staatstheater Wiesbaden and La damnation de Faust (2014) for the Deutsche Oper Berlin. Marcia Haydée als Penelope, a 25-minute dance film featuring Marcia Haydée and Robert Tewsley, was broadcasted by ARTE in 2006.

In 2005, his full-length ballet Die Kinder (2004) for the Aalto Ballett Theater of Essen was nominated for the “Prix Benois de la Danse”. And his original production of Poppea//Poppea for Gauthier Dance at the Theaterhaus Stuttgart was named one of the world's ten most successful dance productions of 2010 by “Dance Europe” magazine, and also won Germany's theatre prize “Der Faust 2011” and the Italian “Danza/Danza” award.