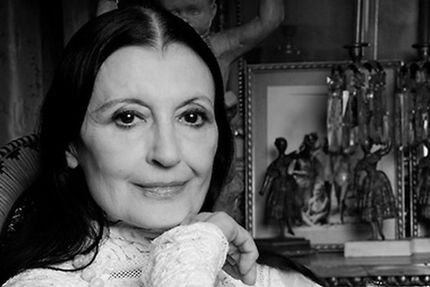 Carla Fracci, one of the most famous and most successful primadonnas of 20th century, was born in 1936 in Milano, Italy. Fracci studied at La Scala Theatre Ballet School starting in 1946. She graduated to La Scala Theatre Ballet in 1954, where she was promoted to soloist in 1956, and to principal in 1958. Other ballet companies she appeared with include: the London Festival Ballet (1959 & 1962), the Royal Ballet (1963), the Stuttgart Ballet (1965), and the Royal Swedish Ballet (1969). She was a principal guest artist with American Ballet Theatre from 1967.

She danced in many classics and added the main man's role in ballet Hamlet to her repertoire (choreography: Beppe Menegattiho, music: Dimitrij Shostakovich) in famous The Elizabethan Theatre. Her dance is a realm of fairy-tales, gentle and smooth, while her movements are ethereal, sometimes dramatic, with unique and extraordinary expression.