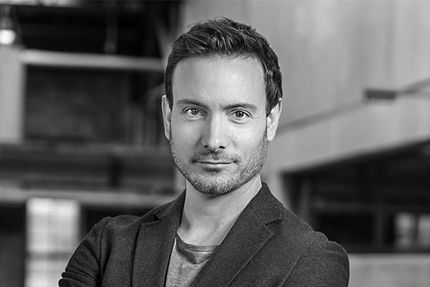 It took only a few years for Eric Gauthier to make it from charismatic audience favourite with the Stuttgart Ballet to internationally sought-after choreographer and artistic director of Gauthier Dance//Dance Company Theaterhaus Stuttgart.

Gauthier Dance premiered in January 2008 with SIX PACK which turned out to be the start of extraordinarily successful years. The Company does not only present pieces by internationally known choreographers like Mauro Bigonzetti, William Forsythe, Jiří Kylián, Itzik Galili, Paul Lightfoot/Sol Léon and Hans van Manen, but also Gauthier’s own choreographies, among those Ballet 101 (2006), M.M. (2009), Orchestra of Wolves (2009).

In 2011, Eric Gauthier was awarded for his choreographic work with Deutscher Tanzpreis Zukunft, a prize which is given to outstanding young artists. His work is characterized by inventive ideas, humor, and amenability, and therefore enthuse a wide audience. Gauthier’s creations are being shown in theaters worldwide, such as the Marinskij Ballet St. Petersburg. In addition, he choreographs for the Staatsballett Berlin, the Stuttgarter Ballett, the Scapino Ballet Rotterdam or Het Nationale Ballet Amsterdam.

Eric Gauthier is in great demand as a dancer and choreographer all over Germany and the world. In the summer of 2015 Eric Gauthier presented the first COLOURS – International Dance Festival, thus bringing his vision of a biennial dance festival to life. Over three weeks the Theaterhaus Stuttgart became a house of the dance world, enthusing thousands of people all over the region. In October 2015 he was nominated as «Director of the year» by the Magazine «Dance Europe».