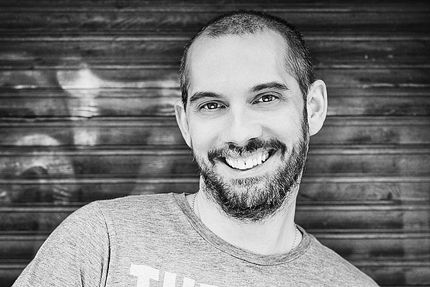 Mr. Dawson shows his sophistication of craft, his eye for beauty and his ability to give ballet a contemporary resonance.

Some people can hardly cope with the intensity he works with. Rehearsals have the same intensity as performances, every single movement has to be imbibed with meaning to make sure the dancer becomes one with the role.

Working with David is a very special experience. From the beginning you know it’s going to be a marathon both physically and emotionally. The performance is the goal but the journey to reach it enriches the development of an artist very much.

David has a special ability to push dancers to their limits and beyond what they know as comfortable and even possible for themselves. Physically and emotionally one reaches places never explored before.

Working with him still is a wonderful and challenging process. For sure no easy one, but afterwards you know more about who you are or who you want to be.

David Dawson in his own words

Aged eighteen I wanted to move, I wanted to fly and I was really eager to work on Balanchine’s ballets at that time. I saw a kind of simplicity in his ballets. I was interested in exploring choreography itself. I wanted to do things with my body that were unusual. I had a flexible body, I was loose, had good feet, a good jump and a good turn. So I felt I needed to be challenged.

Every ballet that I make is made up of a lot of different elements of inspiration. When I’m making something, I need to focus in on my interests at that present time, as a person. So it becomes kind of biographical, in a sense. But at the same time, at the end of a process, the result can be seen in many different ways; it doesn’t have to be seen in the way that I made it.

The unique challenge of a narrative ballet is to work with a fixed linear plot. As a choreographer you must find a way to convey a complex story without words.

I’m a very impatient person. I just like to go one way, in one direction. I don’t want to come the same way back. I always trusted dance, my knowledge, my opinion of dance. It is like a relationship for me.

The heart knows no prejudice, rules, or boundaries. We don’t choose who we fall in love with. But we sometimes forget to listen to our hearts. We are so busy trying to survive the rules, trying to be a part of the race that the world has become nowadays, that we do not take care of love and always judge people who are different. Tristan and Isolde show us that love has to be stronger than boundaries and rules, that we have to fight for it.

British choreographer David Dawson is one of the most innovative dance makers working in classical ballet today. His personal choreographic style transforms classical ballet in new ways, and his signature works are atmospheric, emotionally physical, abstract/narrative pieces that have been praised by critics and audiences worldwide. Dawson's works have been performed in more than 25 countries and entered repertoires of many ballet companies.

Dawson has created numerous ballets internationally, including his full-length Giselle, which had its world premiere at the Semperoper. Amongst other signiﬁcant works are The Human Seasons, day4, The Third Light, Morning Ground, Das Verschwundene|The Disappeared, A Sweet Spell of Oblivion, On the Nature of Daylight, The World According to Us, dancingmadlybackwards, 5, Opus.11 and his highly acclaimed timelapse/(Mnemosyne).