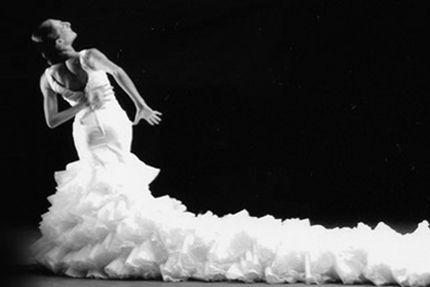 Born in Montilla (Córdoba), she began her academic formation at a very young age, graduating both in classical Spanish dance and ballet and soon traveled to Seville to pursue her studies in the discipline of flamenco with great masters such as Manolete and Manolo Marín, being the latter one who initiated her in her professional career in the opera Carmen under the direction of Carlos Saura. In 1996 she became a member of the Compañía Andaluza de Danza, where she remained during eight years. She participated as a soloist in all the performances, traveling through the world´s main festivals and theaters.

In November of 2004 Ursula became a guest artist of the “Ballet Nacional de España” where she remained until 2006, touring during this time the show “La Leyenda” and “Café de Chinitas” under the direction of Jose Antonio Ruiz.

In 2007 Ursula started her own company and released her first work “Abriendo Camino” for the 2007 Flamenco Festival of Jerez. Her productions received numerous awards.

Besides touring in different countries, Ursula is giving workshops all over the world not to mention in “Flamencodanza Studio”, her own school in Seville.