Classical music is classical because it opens an infinite space for interpretations for the creators.

Intoxicated by “the melancholy happiness” of the Prokofiev music as Teodor Currentzis put it when speaking about the Cinderella, The Perm Ballet created his story, which is neither a fairy tale nor a parable, but rather a novel about their theatre, their art and the history of their country that is the same for all of us.

Year 1957. “The main theatre of the country” stages the Cinderella and the web of intrigues, passions and interests rapidly evolves around the production. Aging primas group together against a rising star, a young choreographer wins over the honourable maestro in an artistic duel, the local minister decides the fates of art, the foreign prince appear at the Festival of Students and Adolescents, intelligence agents watch over the purity of morals and the political orientation of citizens vigilantly, the wardrobe of the artists changes dramatically after the tour abroad…

This performance has got it all:

There is love, too. A big and complicated, that requires one to make a choice and sacrifice. With hopes and mistakes. Very bright and therefore topped by the magically beautiful open ending.

New Cinderella looks like a guidebook on ballet life, from Hell to Paradise.

Perm Cinderella is not a “ballet drama in three acts”(…), but a true film where dance and music are the main means of expression.

Cinderella is about theatre and the people without whom it would remain just an architectural construction. A theatre story about artists, narrated with humor, sadness and infinite love.

The fairy tale escalates and tamps the reality and gets together all the tiny episodes from different times and countries.

Apart from a romantic heartbreak story of a young danseuse Vera and an oversea stranger François, separated by ever awaken KGB; apart from satire sketches on the political and ballet morality of 1950s, Perm’s “Cinderella” evokes quite esthetic subjects: it reflects on the progress in art, bringing hope of its inevitability.

These impressive classical passages are composed so softly, naturally and consistently, as though they follow the paradigmatic rules — so was the way the author restored disgraced choreography of dramatic ballet.

Miroshnichenko staged a respectful homage to the ballet universe, where love and admiration mix with the acidity of an observant person keeping in a pocket two decades of experience with the second principal theatre of his country — Mariinsky company. The new “Cinderella” may easily serve a guide to ballet world, as if to Paradiso and Inferno, while the libretto by Miroshnichenko deserves to be published as a quite assertive literary piece.

Year 1957. Moscow hosts the International Youth and Student Festival. «The main theatre of the country» stages the Cinderella.

A prominent ballet master comes to the morning rehearsal in order to choose the artists for the new production. Here he meets Olga Svistokrylova, the prima of the theatre, honoured artists Sheneshkina and Prisyadkina, many famous soloists and the younger dancers.

Among the young artists there is Vera Nadezhdina who has just come to the company.

During the auditions the ballet master gets distracted by a dancer who talks to her friend aside. This is Nadezhdina. The production director gets furious and leaves the class room.

In the hall everybody stands in front of the blackboard with the cast for the new production. Vera does not find her name in the list and she feels very upset. Several men in formal suits pass along the hall. This is the Minister of Culture with his team who accompany François Renar, the principal dancer of the Paris Opera, invited to dance in the premiere at the Main Theatre. Everyone looks at «the star» with interest.

Angry prima ballet dancer Svistokrylova appears. The trying of new costumes did not go smoothly and she makes the scandal in front of the whole company. Yakov Feiman, the oldest ballet shoe maker, receives the worst of it. In the company he is known as Uncle Yasha. Pointe shoes that he made for ballet dancer Svistoplyasova fly straight into his head. Uncle Yasha is very insulted. Everybody leaves.

Only Vera stays to comfort Uncle Yasha. François appears, he got lost in the theatre couloirs and he meets Vera by chance. He really likes the girl. Those who accompany François finally find him. He needs to try the costumes and then go to the rehearsal. At the rehearsal there is the Minister of Culture, his fellow officials from the ministry and numerous photo reporters. The rehearsal does not go smoothly. François does not like neither choreography nor his partner and he refuses to dance in the ballet. Everyone feels confused. The minister talks to the director of the theatre who is bewildered: there is a young choreographer in the company, Yury Zvezdochkin, but it might not be right to let him stage the big ballet production straight away… Nevertheless, the Minister of Culture orders Zvezdochkin to lead the production…

Shocked by the unexpected turn of events, Yury Zvezdochkin should immediately begin rehearsals. No one from the ballet company believes in him and wants to participate in the production. Only Vera is eager to work with the young ballet master. He teaches Vera new combinations one by one and she manages them perfectly. François appreciates the new choreography and he wants to participate in the production again. Gradually the other artists get involved in the creative process. What is happening now reminds a dream.

Soon the time to show the first part of the production to the Commission of the Ministry has come. Surprisingly the majority of the commission likes Yury’s work. The Minister is happy. The commission votes for the production. The time of the new choreography and new ballet masters has come!

The day of the first night finally comes. The ball scene is on the stage. The decorations and costumes strike with the rococo splendor: here there are numerous court ladies and their gentlemen, servants in liveries, the master of ceremonies, and, of course, the prince. It really looks like a fairy tale! The role of the mother in law is given to Olga Svistokrylova, and her daughters are played by Olimpiada Prisyadkina and Irina Sheneshkina. François, of course, plays the Prince and Vera Nadezhdina is the Cinderella.

Vera warms up behind the stage. Uncle Yasha comes, he wishes Vera the luck, blesses her and asks her to try the pointe shoes that he brought. The girl thanks him for the gift. With a sinking heart and a sense of sacred awe she prepares to step on stage.

The spectators and artists are enchanted by the Cinderella, the former are struck by her charm and the weightlessness of the dance, the latter see the true ballerina in her. Dances follow one another before the first duet of the Cinderella and the Prince. Vera and François do not have to invent their emotions for they truly have feelings for each other.

The performance is coming to an end. It is a success. Nobody expected such a triumph — the Soviet Union has given the world a new talented choreographer. The officials of the party come on stage with the flowers. They announce the important information: the ballet company of the Main Theatre goes on tour abroad. Everyone is happy: this is the first foreign tour of the theatre. Vera and François are particularly delighted with the news, that means that their separation won’t be long and that François will show Vera the most romantic city in the world — Paris.

A moonlit night. Vera and François are overflown with the emotions from the triumphal premiere, upcoming tour and mutual feelings, they stroll in the Alexandrovsky Park near the Kremlin. The lilacs are blooming and the air is filled with its aroma. They are so happy that they do not pay attention to anyone else, which is wrong, as their relations are under the surveillance of the comrades from the authorities.

The Closing Reception of the International Youth and Student Festival at the St. George Hall of the Kremlin. After the speeches and greetings there comes the time for dancing and informal talks. Vera and François are together. Suddenly the comrades from the Committee of the State Security come to them and invite them for an interview. Vera is accused of spying. She won’t be able to see François anymore. She cannot go on tour and «the Prince» should leave the Soviet Union in 24 hours. At the same time all the invited are raising their glasses for the festival. The sound of the Chimes at the Spasskaya Tower.

The artists of the Main Theatre are invited to the director’s room for the interview one by one. Vera is among those who cannot leave the country, in the very first year of her work in the theatre she is considered to be «extremely unreliable». It means that she might not see François again.

At the airport the artists are accompanied by their friends and families, it is time for departure. Vera comes to Yury Zvezdochkin to wish him good luck. It’s time to go!

A square in Madrid on a hot summer day. Artists have a free day and they finally get a chance to see the city. The Soviet people are amazed and pleased by what they see. The passionate Spaniards flirt with Russian ladies, while the Spanish women look with interest at Russian guys. The random street dances begin. The Soviet artists are accompanied by the comrades from the Committee of the State Security who are guarding them from temptations and the locals.

The tour goes on to the East. Now the ascetic Soviet artists look different: they are dressed up in brighter colours and there are more things in their baggage now.

The company emerges in the intoxicating atmosphere of the eastern aromas, temptations and luxury. Comrade Lazeikin from the authorities steps out of the crowd. He should make sure that the behavior of the ballet dancer does not go beyond the Soviet moral code.

The tour is about to finish and the company prepares to return home. François comes to see and greet the artists. He tries to pass his letter to Vera through Yury. But the comrades from the authorities see everything.

After the departure of the company the theatre rehearsal rooms and halls are empty. Vera Nadezhdina is alone. On the blackboard she reads the reviews and newspaper articles about the tour. In her vivid imagination she sees the pictures from the tour, the ovations, new countries and impressions… What a pity that she is not there.

The company comes back from tour. The artists are entering the rehearsal room. They have changed a lot. Yury Zvezdochkin approaches Vera and gives her the letter. Prisyadkina notices that and leaves the room. The coach enters and the class begins.

Vera Nadezhdina is not allowed to work in the capital. She moves to the Urals, to the city of Perm that was known as Molotov at that time. While strolling along the streets of the city Vera sees François in every person she meets. But, instead, she meets Yury. He came to propose to her to stay together for life. But is she ready for that?

… The time has passed. For many years Vera and Yury have been pleasing the spectators with their art. They stayed together, passing through the decades their love and respect for each other, their sincere love for art, and no politicians could hamper them. Vera and Yury lived a happy life together and grew old together.

And out of the blue… Uncle Yasha comes to visit them. Could that be possible for he is no longer with us? He invites Vera and Yury to follow him. The light goes out slowly. They are moving forward with the relief. 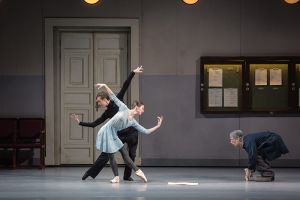 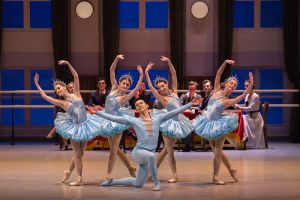 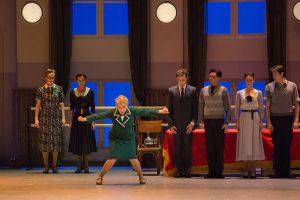 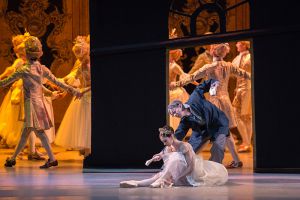 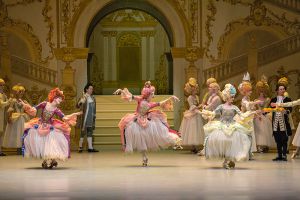 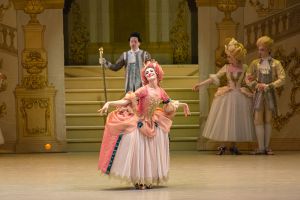 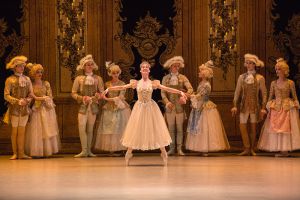 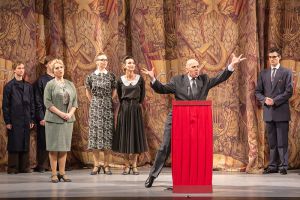 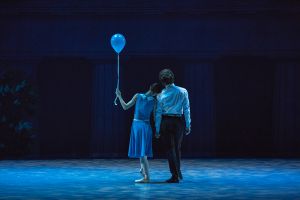