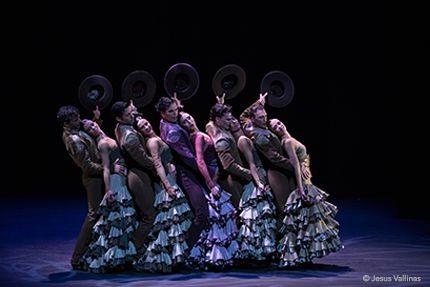 They don't do ballet. They don't just do flamenco. But they did prise Spanish dance … and develop it into a riot of different styles.

The delights are more to be found in the moments when the stage is flooded with BNE’s drilled dancers, the women flirtatiously wielding bata de cola and fan, the men restlessly thundering out flamenco’s furious footwork. But there’s rather a lot in need of pruning around these pleasures.

The sharp, sleek unison phrases and passionate masculine energy of the dancers have entranced viewers around the world as much as it wowed the fashion influencers in the live audience.

Founded in 1978, the company focuses on the preservation, development and promotion of Spanish dance traditions in all their variety, including classical, stylized and folk dance, as well as the traditions of bolero and flamenco.

The company, led since 2019 by Rubén Olmo, is active on the international stage and consistently works to attract new audiences. The “canon” of Spanish dance makes up a significant part of their repertoire, but the company also simultaneously develops new directions, open to avant garde influences and movements. In this regard and with no fear of experimenting, the company has invited the world’s leading choreographers, as well as young directors, to collaborate. Tours are also an important part of the company’s work, and Ballet Nacional de España performs regularly throughout Spain and abroad, alternating between large-scale productions and shorter pieces that give an overview of the very different aspects of Spanish dance traditions and their modern developments.

Occupying the vanguard of Spanish dance, the Ballet Nacional de España pays a lot of attention to its educational duties. The schools and universities of Spain benefit from a wide range of educational projects, while the company also organizes studios, concerts, and lectures for children. In 2016, the ballet’s first book, a history of flamenco, was published and the company also launched the children’s quest game Bailando un Tesoro—“Dance for Treasure”. Numerous seminars and masterclasses for dance professionals allow the school’s adherents to maintain the highest technical levels, attract new followers all over the world, exchange ideas, and seek out new interpretations.

The company has won numerous national and international awards, including the New York Metropolitan Critics' Prize for the Best Foreign Show in 1988, the Japanese Critics' Prize in 1991, the Critics’ Prize for Best Show at the Bellas Artes Theater in Mexico City in 1994, the Spanish newspaper El Pais (Tentaciones) Prize for the show Poeta in 1999, the Critics’ Prize and Audience Prize at the Festival de Flamenco de Jerez de la Frontera in 2002 for the choreography of Fuenteovejuna by Antonio Gades, the Audience Prize at the Festival de Jerez in 2018, the audience-voted Awards Teatro de Rojas in Toledo in 2008, 2010, 2012 and 2014) and an Extraordinary Prize “For Contribution to the Preservation and Promotion of the Best Traditions of Flamenco at the Cante de las Minas International Festival in 2010.