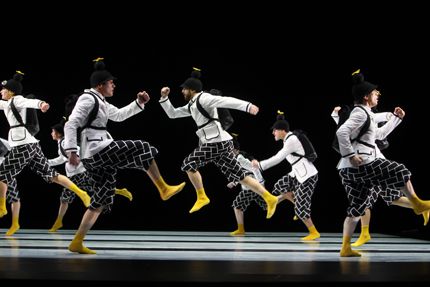 The Theater Osnabrueck was opened in 1909 and also presented ballets but not every season. Above all the dance company had to participate in opera and operetta.

The Dance Company Theater Osnabrueck developed its own profile starting in the 1960s with artistic directors and choreographers who created dance pieces with a contemporary idea and with contemporary music.

With the artistic director Kristina Horváth (1981-1983) and her Tanztheater the dance in Osnabrueck got connected with the international dance scene. Her followed as artistic directors and choreographers of the company the US American Joel Schnee, the Swiss Gregor Zöllig, the Italian Marco Santi and the Dutch Nanine Linning. They all have opened new horizons with their creations of dance.

Mauro de Candia took over the directorship of the Dance Company Theater Osnabrueck in the season 2012/13 and has built his own ensemble of 12 dancers. During the six seasons he has shaped the dancers into a versatile contemporary ensemble.

In the six years of its existence, the company has gained more and more national and international attention. This leads increasingly to guest performance requests in Germany, Italy and China. But the Dance Company is not a touring company because it is firmly integrated into the repertoire system and the disposition of the multi-branch theatre of Osnabrueck.