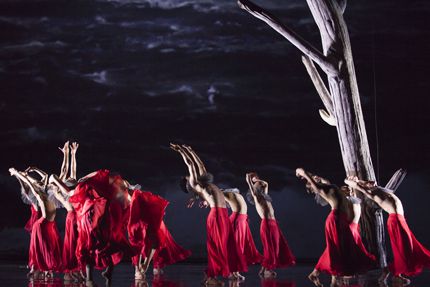 The Polish National Ballet has made an impressive forward stride, firmly establishing the company's credentials in European ballet.

The first thing I can say about the company is that the dancers are all outstanding: strong, limber, well trained.

The Polish National Ballet is the leading ballet company in Poland, with a host of nearly 90 Polish and foreign dancers guaranteeing the highest standard for every performance. Its aim is to reflect the nature, energy and aspirations of the Polish people.

Its rich traditions date back to the 17th century when a lot of prominent dancers of the epoch performed at the court of Polish king in Kraków and then in Warsaw. In the 18th century the troupe of His Majesty’s Dancers was born by the will of King Stanislaus Augustus. In 1766, even the great Jean-Georges Noverre applied for the position of ballet-master in Warsaw, though unsuccessfully. He dedicated and sent his famous reformatory work Théorie et pratique de la danse to King Stanislaus Augustus. The work has survived to this day, and is housed in the Warsaw University Library’s Picture Collection. The Polish National Ballet works and performs in the most prestigious opera house in Poland: the Teatr Wielki – the Polish National Opera.

In 2009 Krzysztof Pastor took the position of the company’s artistic leader. For decades he has been a resident choreographer with the Dutch National Ballet. Both critics and spectators agree that Pastor’s influence has changed a lot the trace of the Polish National Ballet’s development. It tends to take the higher and higher place in European ballet ratings.

Another important side of the Polish National Ballet’s philosophy is to give an opportunity to the company’s emerging young choreographers, allowing them to create pieces within the annual workshops.

Polish National Ballet has performed recently in such countries as The United States of America, Russia, China, Spain, Norway, Finland and Lithuania.