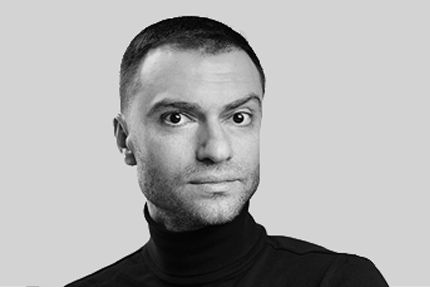 Successor to St. Petersburg ballet school, working at the banks of the Kama River, he creates tailor-made productions which premieres always attract an overwhelming attention of both colleagues and audiences.

Miroshnichenko’s choreographic language is prettily diversed and natural, it is free from exertion or artificiality. He touches very important layers yet charms by his good humor and lack of edification.

Alexey Miroshnichenko
in his own words

Alexey Miroshnichenko is a principal ballet master of the Perm Tchaikovsky Opera and Ballet Theatre and one of the leading choreographers working in his own recognizable style. «Ballet can express what cannot be said by words», — keeps telling the Master who is always looking for new ways and forms of emotional expression. He is second to none when it comes to expressing the feelings and sentiments through the plastic language, where words cannot help.

Miroshnichenko was born in Donetsk in 1974. After the graduation from the Vaganova Ballet Academy he started dancing with the Mariinsky Ballet. Already in the age of 23, he debuted as a choreographer with the Stravinsky’s The Wedding. Having found his vocation, in 2002 he got a diploma of the Chorographical department of the Vaganova Ballet Academy and taught there for several years.

Miroshnichenko is always searching for something new: be it a new music for his performances or new meanings in canonical works. In 2007 he staged two ballets to the music of contemporary artists — Ring to the music of Russian hip-hop band 2Н Company and As an Old Grinder to the music by Leonid Desyatnikov. In 2015 he refreshed the forgotten suite Conditionally Killed by Shostakovich, in which he reminded us that the most serious and tragic composer of the 20th century was actually a jazz fan. And in 2016 he totally rethought Sergei Prokofiev's Cinderella by telling nostalgic and touching story of the country.

The choreographer collaborated with the Bolshoi and Mariinsky Theatres, the Novosibirsk Opera and Ballet Theatre, the American Ballet School and the New York City Ballet. Miroshnichenko has created the choreography for the Valery Fokin's dramatic performance The Marriage (Alexandrinsky Theatre, St. Petersburg) and for the Pavel Sanaev’s film Kilometer Zero. Also he has been invited as a choreographer to the sensational blockbuster Matilda.

Alexey perceives his affair with the Perm ballet to be his destination: «Probably, it’s my fate. Since the beginning of my studies in the Vaganova Academy, I often heard the word «Perm»: our veterans remembered the years of evacuation, our ballet masters regularly gave workshops in the Perm ballet school, and many graduate students of this school danced on the Mariinsky stage». When the time for decision arrived, all the professional surrounding Miroshnichenko (as Makhar Vaziev, Leonid Desyatnikov, Polina Osetinskaya, Pavel Gershenzon, Alexei Goribol and others), agreed that a dancer from the Mariinsky Company was the best candidate to lead the Perm ballet. Together with these dancers Miroshnichenko made many significant artistic and creative achievements.

Alexey Miroshnichenko has a wonderful talent to renew and enrich the esthetics, to turn 2D text into 3D reality — to give stories a strong sense and a deep meaning. «The time calls for something more complicated, with many layers of perception, and something more choreographically saturated», — he says, but nevertheless does not stop to declare his affection for the Russian classic ballet.

In 2011 Teodor Currentzis became the artistic director of the Perm theatre, and together with the principal ballet master they formulated so called «Perm context» — a creative concept implying a certain degree of the artistic independent when the Perm ballet school incorporates the best traditions of Moscow and Petersburg ballet schools, but it doesn’t become its combination. The Perm ballet is always following the development of both Russian ballet capitals, but at the same time it is trying to save its own unique characteristics, freedom of expression and its particular role in the development of Russian music theatre. During the years of this tandem, the Perm ballet has considerably grown and gained international popularity. Nowadays it’s a national dance brand which attracts balletomanes from all over the world.

In May of 2018 Alexey Miroshnichenko, multiple laureate of the Golden Mask Award (2012, 2013, 2018) and the principal ballet master of the Perm theatre, received the title Honored Artist of Russian Federation.