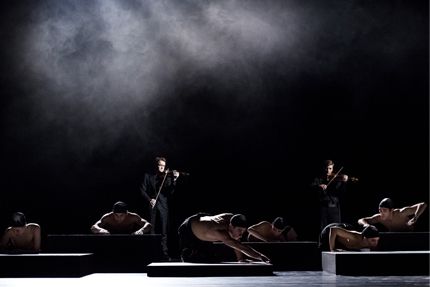 Semperoper draws out the music in clear definitive tones, relishing the opportunity to show the subtleties of the choreography with clarity of movement.

Semperoper Ballett Dresden is an energetic and ambitious company which gained a great recognition.

For nearly a century Semperoper Ballett Dresden has been maintaining its impeccable reputation in the choreography world. Today, thanks to its up-to-date repertoire and first-class dancers from various countries, the company firmly stays on top of the world ballet ratings. Semperoper bio starts from the rather distant 1920-s. Throughout its history the most prominent ballet productions that were ever staged in Germany were shown in Semperoper. During the World War Two the famous theatre building was almost completely destroyed and only the walls survived. Full-scale restoration works started only in 1975 when original drawings of architect Gottfried Semper were accidentally discovered in Vienna. Now the theatre that was opened anew in 1985 holds Semper’s name.

Special relations tied the company with an iconic choreographer, the founder of a new direction in contemporary choreography, William Forsythe. Starting from 2006 his student Aaron S. Watkin directs the company. Over a span of 10 years he managed not only to unite many extraordinary dancers in his team, but also collaborate with the brightest choreographers of our time.

At the moment there are more than 60 dancers of 22 various nationalities in Dresden Semperoper. All of them are bright individualities who bring features of their national ballet schools to the company. This diversity sums up in a precious atmosphere of creative freedom where classical ballets and modern productions are equally successful.